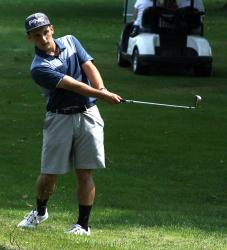 WAVERLY, N.Y. — Things were about as close as they got at the opening NTL golf match at Shepard Hills Tuesday.

Defending league champions Cowanesque Valley and last year's runners up Wellsboro were tied at 343 after their top four scores.

At the first tiebreaker score Christian Kemp's 99 was good enough to edge Taynton Repard's 100 to give the Indians the sweep.

"I knew Wellsboro was ready to go," CV coach Larry Moon said. "So the results were pretty much what I expected for match one."

Last week, the two teams went 1-2 in the Coudersport Invitational to tee off their seasons. That was a CV-Wellsboro finish as well and as expected the Hornets came away a little dejected coming so close.

"We're not real happy we lost in the tiebreaker by one shot," Wellsboro coach Steve Macensky said. "It's disappointing, you don't get a lot of chances to beat Cowanesque Valley. They're a great team and today was that opportunity."

If it went to second tiebreaker, sixth player Wellsboro's Daniel Mitchell (108) would have edged out CV's Joel Heck (109).

Macensky believes that his players are going to have to leave it all out on the course if they are going to get past CV.

"It's all up to the kids at this point," he said. "If they really, really want it, then they are going to bust their butts over the next week and work and get that extra shot next week."

For CV and Wellsboro, though, it was the unsung heroes stepping up.

Indian Tyler Vargeson, number three in the CV line-up, earned medalist honors with a 76 as their top two players — Tanner Adriance (87) and Austin Outman (85) — shot above their average.

"Tyler was big," Moon remarked. "That's the best score he's had in the past two years."

In the windy conditions, Vargeson took it one shot at a time.

The junior is hoping this is a sign of things to come.

One bright spot for Wellsboro was the play of Brandyn Tuttle, who continues a strong start to the season after taking second at Coudersport.

"He played really well today," Macensky said. "That's two rounds in a row for him in the high 70s, which is a good score. He's got a good future."

"It was one of my better rounds," added Tuttle. "It's pretty good, but I left a couple strokes out there, though. I had way too many three putts."

He is encouraged by the fact that he shot well, but has room to get better.

"You can scramble around and still have good scores," Tuttle said.

Last year, the junior had a slow start so he's excited this year has begun so well.

"It's nice to carry over my game," remarked Tuttle. "It's good to shoot two good scores together."

For the Hornets, Ben Barnett shot 81 to join Tuttle in the top four overall scores of the day while Joseph Propheta, 88, and Ty Morral, 96, were the other Wellsboro scorers.

Sayre's Ryan Murrelle, last year's NTL Golfer of the Year, finished with an 81, while Towanda sophomore Tyler Hawley shot a career best 83 to round out the top five individuals.

"I had a lot of good shots," Hawley explained. "A few birdies, a few pars. That felt a lot better than last year."

Getting a personal best on a less than ideal day of golf gives Hawley confidence going forward.

The sophomore spent most of the summer working on his game and playing in tournaments, which he credits for his improvement.

"I made a lot of putts today," remarked Hawley.

For the Redskins, Nate Sweet and Gavin Blair both shot 90, Ben Harding had a 92 while Nick Allis carded a 106.

Dylan Krise led Athens with a 99 while Nate Kennedy shot 101. Also for the Wildcats, Brady Smith carded a 110, Michael Cook shot 113, Chase Minnick had 114 and Anthony Peterson scored a 115.

The second NTL match is next Tuesday at CV's home course of River Valley.

Last season played out with CV winning the title and Wellsboro second, but the Hornets' near sweep Tuesday shows that things could be even tighter this season.

"Every stroke is going to count," said Tuttle. "It makes you strive to shoot your best every round."

Especially with CV and Wellsboro golfers always playing side by side in groups.

As for the Indians' part, they know they have to get better.

"We will need to push ourselves more," Moon said. "This is a wake up of what the league's going to be about."

"It's going to be a tough year," Vargeson added. "We have to start playing better, I guess."

However, having a rival has its perks.