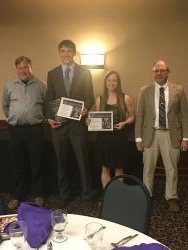 The NTL also had former NTL Athlete of the Year and former Penn State shortstop, Taylor Skerpon as a special speaker. Skerpon spoke about the work ethic and drive needed to become successful as not just an athlete, but a person.

The NTL Sportsmanship award was given to Wellsboro school district for excellence in sportsmanship throughout the year.

Wyalusing's head wrestling coach Gary Haley was named the Coach of the Year by the NTL.

Along with the Athlete of the Year awards, the recipients also received a $500 scholarship from the Daily Review and Morning Times.

Canton's Brooke Ward was named the NTL female Athlete of the Year. Ward participated in soccer, softball and track and field for the Warriors. For soccer, Ward was named team captain for the 2015 and 2016 seasons, scored 91 goals in her career, and was a 2016 first-team all-state selection. In softball, Ward was named the 2016 Daily Review All Region Player of the Year, 2nd team all-state selection and held a batting average of .562 in 2016. For track and field, Ward was a district qualifier three times in the 100 and 200 meter races and took eighth place in the 400 meter run at districts in 2014.

Academically, Ward is ranked 10th in her class with a GPA of 96.2. She is a member of National Honor Society and was named a 2016-17 NTL Academic All-Star.

"It's really cool to even be nominated," Ward said. "There are so many amazing athletes here tonight so to be recognized is really nice. I'm really excited, definitely really nervous, but excited to see what's next in my career."

North Penn-Mansfield's Brock Burleigh was named the NTL male Athlete of the Year. Burleigh played football, basketball and track and field. In football, Burleigh was named first team all-state in 2015, was a three-time NTL first team all-star and holds a District IV record for the most passing yards in a season: 2,734 yards. In basketball, Burleigh was twice named the Daily Review's all-region player of the year, led NPM to a District IV title in 2017 and is a member of the 1,000 point, 500 rebounds club. In track and field, Burleigh was a PIAA district medalist in the 4x400 relay.

Academically, Burleigh is ranked first in his class with a GPA of 105.05. He also scored a 4 in AP government and politics and was a two-time state qualifier for FBLA.

"I'm really excited," Burleigh said after receiving the award. "I've put a lot of work in over the years and to have it pay off like this is great. It was really nice of the paper to give the scholarship, too. I'll use the money well. I'm attending Bucknell and you know, it's not the cheapest college, so I'm really grateful."