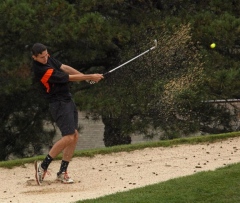 TOWANDA - The Black Knights knew they were close to getting an NTL sweep but kept coming up short.

It turns out all they needed was some home cookin'.

"Today was an absolute must-win for us," said Towanda coach Tim Farley. "Falling three down to Athens with only four matches left would have been almost impossible to overcome. But now, it's back to all-square - we don't have to worry about what's already happened. We can look forward to trying to get better, and see where that takes us."

At Towanda Country Club Towanda shot 361 and got a little help as Northern Tioga edged Athens (374-384) to give the Wildcats two losses on the day.

The Knights and Wildcats are now tied at 16-2 atop the league standings. Northern Tioga is lurking behind at 13-5.

The weather had also changed quite considerably since the last NTL match on Tuesday at Corey Creek. Then it was hot and humid, Thursday it was dreary and cool with a light rain.

"We scored about the same as our earlier matches, but considering the weather, we did a pretty good job of avoiding big mistakes," Farley remarked. "I wouldn't say we play better in the rain, but I will give credit to our teams in recent years - it doesn't seem to bother us as much as other teams. We were able to take advantage of that today."

Also for the Knights Mitch Shoemaker shot 88, Zack Lantz shot 94 and Chandler Dunn had a 97 while Ryan Chilson and Dayton Wickwire both carded 110s.

In exhibition action Jared Lantz and Caleb Lines both shot 49, Jon Hoffman had 52, Connor Wilcox scored a 53 and Dawsan Manning shot a 59.

"Our guys are playing decently - but we can get better, and we know it," Farley said. "There is still a lot of room for improvement, from top to bottom of the lineup. We still haven't had a day where we have posted four good scores at once."

Tanner Adriance led Northern Tioga with an 83 while Tyler Vargeson shot a 96. Caleb Fitzwater had 97, Bryce Ianson carded a 98, Riley Thompson shot 107 and Christian Kemp had a 116.

In exhibition action Brandon Paul shot 49 and Alex Abbott had 59.

After Sitzman, Jacob Aquilio and Ryan Kennedy both scored 92 while D.J. Springstead shot a 122, Taylore Lunger had 127 and Adam Hunsinger shot a 144. In exhibition action Brandon Herbst scored a 56.

Northeast Bradford came in fourth at 387 led by Nate Watkins' 83. Mike Wallitsch shot a 97, Nate Chilson had 98, Grant Marino scored a 109, Jared Harris notched a 112 and Jarrett Randall scored a 130.

With Towanda and Athens evened up, and Northern Tioga not far behind, anything can happen in the next few weeks.

"We caught some breaks today - home cooking is always nice, and Athens had some kids fighting their swings a bit," Farley remarked. "We know they will be much better next time. Northern Tioga also did us a solid by having a good day and grabbing second. They're a good young team, and right in this thing as well."