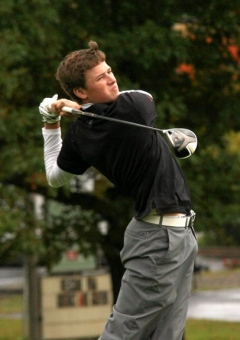 Innocenzo became the first Black Knight to win a District IV individual golf title and he did it on his home course, Towanda Country Club.

His coach Tim Farley knew his top golfer had the ability to make it out of districts but to win the title he wasn't sure.

"This never even entered my mind until after the other day," he said. "When he was sitting in third just seeing how he was carrying himself and the confidence he had. Honestly, probably Thursday night it occurred to me that it might be possible."

Innocenzo is one of four NTL golfers who will be going to regionals.

Sayre's Ryan Murrelle came on strong to take second. The freshman shot a 78 on Saturday for a two day total of 161, 4-strokes behind Innocenzo.

North Penn-Mansfield's J.P. Shaw had a strong day, shooting 79 for a two day total of 166 to take fourth. He came into Saturday with an 87.

And Wellsboro's Brett Kendrick survived a rough Saturday to take the final qualifying spot. The senior shot 88 for a two day total of 167, one stroke ahead of Lourdes' Evan Salmone.

Innocenzo came into Saturday in third, two strokes back of the leader.

"My only goal was moving onto regionals," explained Innocenzo. "Then as we started moving throughout the day some kids were struggling and then it just hit me that maybe I will be district champ."

Innocenzo started off strong, taking a birdie on the first hole. But after that he got into a little rut, bogeying the seven of the next eight holes to finish the front nine with an 41.

Then on the back nine he found his groove, getting par the first five holes then scoring a birdie on the par-5 15. On 12 his tee shot ended up down by the 13 tee box but he was able to save par thanks to a chip shot he almost holed for birdie.

He would bogey 16 but got through a tough 17 with a par then played it safe on the par-5 18 to finish out with a five and take home the title.

And he did this in less than stellar conditions as it rained during the front nine. However, by the end of the round the sun was shining on the district champion.

"I was just focusing on one thing, every shot," said Innocenzo. "Keep my focus throughout the weather and go as low as I can."

The Black Knights have had a few District IV team champions but Innocenzo goes down as the first individual to call himself a champion.

"It feels kind of good," he said about the distinction. "You know there's been a lot of really good players to go through Towanda."

"It's pretty remarkable," Farley said about Innocenzo being the first Towanda district champion. "I thought coming into this year that Nick, if he kept things together, would have a pretty good shot at advancing out of the district, especially once we found out that we would be able to have districts on his home course."

Doing it at home was just the icing on the cake for the junior.

"That was pretty cool," he remarked. "I felt like I had the upper hand."

He had a gallery of former Towanda golfers and golf fans following him around the soggy course.

"That was kind of cool," Innocenzo said. "A lot of friends and family."

Farley believed that the gallery following Innocenzo was important for his game.

"To have friends and family and former Towanda players and they're all there and they're all rooting him on and all that, that was big," said Farley. "I think that helped keep him loose. It kept him focused I think."

And nobody may have been more anxious on the day than his coach.

"I think he is more excited than I am," remarked Innocenzo.

Farley was in the clubhouse most of the day recording scores but kept tabs on the day's play through text messages.

"I don't like to go out on the course and show my nerves," he explained. "So this was actually better than that because I would have been chewing my lips off out there. I was getting messages and I knew he was doing pretty well within in his group then I started hearing rumblings about Murrelle making a run."

The Redskin used back to back birdies on 11 and 12, followed by a birdie on 16 to get to within one of Innocenzo.

"God Almighty hats off to that kid, too," said Farley. "The way he played today as a freshman, unbelievable. I was a little on pins and needles."

But a double bogey on 17 by Murrelle gave Innocenzo breathing room.

"He just closed the deal," Farley said about Innocenzo. "Watching him just come down 18 was pretty cool. Iron down the middle, iron down the middle, iron on to the green, two putts, just exactly the way he should finish. And that's what he did all week, he just managed his game so well and never got into any trouble. In 36 holes he made two double bogeys on Thursday and that's it, just fantastic managing his game and managing his emotions and just playing the kind of game he's capable of."

Murrelle had a similar day to Innocenzo, shooting 41 on the front then catching fire on the back to shoot 37.

"I'm very happy with myself and how I played this weekend," he said.

Murrelle was focusing on moving on to regionals when he saw that he was tied for sixth coming into Saturday.

Once he got onto the back nine Murrelle could tell he was having a good day.

The first year varsity player picked a good time to peak, shooting his best two scores at districts, including breaking 80 for the first time.

"The best round of the year at districts feels pretty good," Murrelle said.

And being a freshman at that.

"It feels very good to me," remarked Murrelle.

Coming into today Shaw felt he didn't have a chance of moving on.

His 87 on Thursday got him to Saturday but he was four strokes back of the last regional qualifying spot with 10 players either in front of him or tied with him.

Then he went out and shot a 39 on the front nine, tied for the low round of the day for the first nine holes. After starting with four straight bogeys he birdied and a double on five he scored back to back birdies on six and seven to get into a groove.

Shaw then finished out the front nine with two pars.

Then the back nine was similar to the front nine, shooting four strokes over par after the first four holes before finishing out with five straight pars for a 40.

Once Shaw got going he got into a rhythm.

"I started out slow but then I picked it up as the day went on," he said. "On the back nine I knew that I had a pretty good chance."

This was also a banner round for Shaw.

As for Kendrick, the senior was hoping for a better showing but pleased to have qualified for regionals.

"It feels good," he said. "I'm a little nervous to see how the competition is but I'm glad I scratched by."

After shooting a 79 and finishing second on Thursday his 88 on Saturday left him wanting more.

"I wasn't hitting well," explained Kendrick. "But I managed to scramble myself together and make it through."

He shot 44 on both the front and back, taking two double bogeys on the front but also parred two tough holes in the par-3 fourth and par-4 eighth.

Despite taking an eight on 18 he was able to sneak through.

Kendrick hopes to get back to how he played on Thursday as he prepares for regionals.

He also kept the Wellsboro tradition of having somebody making it to regionals as the Green Hornets have had the best showing at districts individually over the past few years.

"It feels pretty good," Kendrick said about keeping Wellsboro's strong tradition at districts alive. "I was a little worried once the day started out by how I was hitting but it's a relief to know that I made it through."

This was one of the best days the Northern Tier League has had at District IV golf.

"Four guys from the NTL, what a credit that is to the way they played," remarked Farley. "Good for (Innocenzo), good for the NTL and good for all of us."

Athens' Jacob Aquilio shot 95 Saturday for a two-day total of 179 to come in 19th, North Penn-Mansfield's Ryan Campbell shot 99 for a total of 181 to tie Wyalusing's Holdan Hitchcock for 20th.

Hitchcock had a 96 on the day.

The East Individual Regional will be held at the Golden Oaks Golf Club in Fleetwood on Tuesday, Oct. 14.

Now these four players will get ready for regionals.

Murrelle will be working on his short game.

"I will be up at the putting green," he explained. "I need to practice my chipping and putting. Chipping was OK, putting was OK but I can get a lot better."

"Hitting the ball straight, keeping it on the fairway," he remarked.

Kendrick will plan on playing it safe at regionals.

"I know the course down there is really tough," he said. "It's a tight course so really it's just hitting the ball well."

Kendrick has the added benefit of having a coach who just recently competed at regionals in Corey Lewis.

"It definitely helps," he said. "I think it's a little more calming because he can tell me how it is. It's good to play with him."