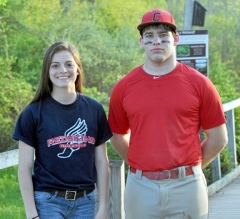 What becomes special is when a person can excel in both athletics and academics and that's something the NTL athletic directors have honored with the Senior Student Athlete of the Year Award.

The award takes into consideration their athletic achievements, along with their academic ones. It also considers leadership and community service.

"It feels great," Route said. "Anything that is for off the field and on the field is a great award to win."

For Skerpon it was special earning the honor.

"It's really cool, being the first girl from Sayre is great," she said. "I didn't really know about the award, it's really special."

Route is the son of Tanya and Craig Route and he has a 4.0 GPA and is a member of the National Honor Society. During wrestling season he was selected to the PIAA State All-Academic Second Team.

Skerpon is in the top 10 of her class at Sayre and is in the National Honor Society.

Athletically Route was a three-sport athlete for Canton lettering in football, wrestling and baseball all four years in school. He was a four-year starter in wrestling and football.

This season in football Route was chosen for the Joel Steven's 5C Award given based on Christianity, courage, compassion, character and commitment. He was selected for the NTL, All-Region and D4 teams and was voted NTL small-school lineman of the year.

In wrestling Route reached the 100-win club and finished with 117 career wins. He was a NE Regional Champion at 220 pounds and made the state tournament. He was a finalist for the sportsmanship award given by the wrestling officials at the D4 North Section Tournament.

In baseball Route is a returning starter, playing first base for a team that made the state final last year.

Skerpon is a four-year letter winner in soccer, basketball and track and field.

She was a tri-captain in soccer and athlete of the season and finished second all-time in school history with 73 goals.

In basketball she was a three-year starter, co-captain and holds the single game record for threes with seven.

In track and field Skerpon is a two-time captain, the school record holder in the 300 hurdles, pole vault and 4x400 relay and a two-time athlete of the season.

This year Skerpon was the region's leading goal scorer in soccer with 27 and she was first-team all-NTL and All-Region in soccer. In basketball she was all-league first team and the region leader in three-point field goals.

In track and field she won NTL titles last weekend in the 100 and 300 hurdles, the pole vault and the 4x400 relay.

For both athletes being chosen among all the other senior athletes in the league was special.

"I have met a lot of other girls competing against them," Skerpon said. "They are all really nice and it's been fun competing with them and it's great (to be chosen)."

Within the community Route has volunteered as a Little League umpire and has helped in the press box at youth football games. Along with his teammates on the Canton football team Route has helped with youth sports camps and community projects such as cleaning up and resetting tomb stones in a local cemetery. Route attends Lightout Church of Faith and is a member of their youth group.

Skerpon was the originator and co-organizer of the Rally for the Cure Pink Basketball game (supports the Robert Packer Hospital Breast Care Fund). The annual event has raised over $7,000 in the last two years. She is a volunteer for special needs children at Camp Sensation and is a member of Redskins to the Rescue Flood Relief Volunteers. She has done Thanksgiving Day Meal Delivery for the Police Benevolent Association and is a Rusy Rail Food Drive Volunteer and took part in the Waverly Presbyterian Church Christmas Pageant.

For Skerpon it was nice to be chosen alongside someone like Route.

"My brother (Taylor Skerpon) played baseball with his brother," she said. "I didn't really know him, but I knew of him and I know he's really good at wrestling, football and baseball."

For Route the one thing that's hard to get used to is that his high school career is nearing an end.

"It's a little weird," he said. "I started as a freshman and now it's senior year and I'm almost ready to move on."

Skerpon will attend Penn State next year and plans to try and walk on to the track and field team, while Route will wrestle at Penn Tech. Skerpon is going into health care related field/business and Route plans to major in civil engineering.

"It's definitely going to be a new challenge," he said.