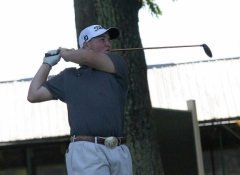 NICHOLS, N.Y. - Coming into Monday things were tightening up for Athens.

After jumping out to an early lead in the NTL standings in the last two golf matches Mansfield and Towanda took home wins on their home courses to tighten things up.

Just three wins and heading into the final stretch the Wildcats were hoping to reassert themselves and get some breathing room at Tioga Country Club and that's what they did.

"The kids are starting to realize their game and their potential," said Athens coach Jeff Novak. "Today was just a culmination of that. We had lost two a couple weeks ago and the kids were definitely ready for this. They saw a little bit that they had let themselves down and it was time to get that win."

Athens had three players under 90 as they took first with a 347, just ahead of second place Towanda (357) and third placy Mansfield-North Penn (378).

Zach Sitzman led the way, tying for medalist honors with Towanda's Nick Innocenzo, as both shot 81.

"Zach again had medalist honors, the third year running," said Novak. "Maybe we should have every match there."

The biggest thing Novak saw on the day was smiles on his kid's faces.

"They had fun," he said. "You're on a golf course, not at school, why wouldn't you be smiling. I was very pleased with everybody, the kids were all positive."

Ryan Campbell and J.P. Shaw both shot 88 to lead the Tigers while Jarrod Burd scored a 92. Patrick Ross had 110, Josh Everetts shot 112 and Carl Dinger scored 118.

For Wyalusing Holdan Hitchcock scored an 88, Scott Eberlin had 99, Alex Dake shot 115 and Drew Gervin had 150.

This win was important not only for Athens to regain their confidence but because the next NTL match is over at Wellsboro.

"Wellsboro is the toughest course to play," said Novak. "Nobody plays it well. It's such a tough course we didn't want to sit back and think 'now we really have to have Wellsboro to push towards an NTL championship.' It's a huge weight off our shoulders."

The NTL will be at Wellsboro's Tyoga Country Club next week.