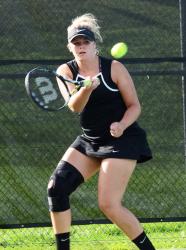 TOWANDA ­— The Black Knights picked up a 6-1 win over Galeton in girls' tennis action on Thursday.

In doubles, Towanda's team of Paulish and Bennett beat Galeton's team of Burrows and Burrous 6-0, 6-2.

Galeton's only win of the evening was their team of Brelo and Nuccio topping Towanda's Cynthia Kerrick and Cassie Swackhamer 6-3, 4-6 (10-5).

Shailei Kraft finished with seven points, 13 kills and one block. Lyndsey Moore helped the cause with six points and 14 digs.

Tioga's lone goal was scored by Hannah Moon with 5:11 remaining in the match.

John Saxe finished with a 104 to lead the Sullivan County team. Alex Baumunk finished second on the team with a 111.