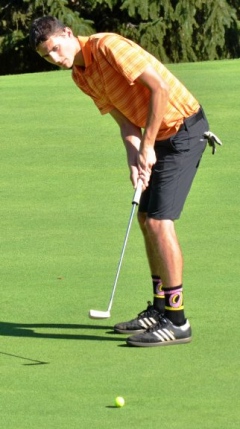 WAVERLY, N.Y. - The Athens Wildcats edged Towanda in an NTL meet at the Club at Shepard Hills on Wednesday to regain the lead in the NTL golf standings.

"It was great, all the kids performed well," Athens coach Jeff Novak said. "I'm proud of each and every one of them."

"It's great to have a tight race," Novak said. "I like a lot of competition in the NTL, it's good for every kid to go in knowing that a different team can win every week."

Zach Sitzman shot a 75 to earn medalist honors again for the Wildcats.

"He's doing very well, he's playing on a different level this year than he has before," Novak said. "He has a goal in mind and he's achieving it so far."

Jacob Aquillio shot an 82 and number four golfer D.J. Springstead shot a round of 89.

"I saw a different look on his (Sprinstead's) face this week," Novak said. "He was smiling, he was enjoying it, that's what it's all about, that's why you play sports."

Derrick Strait shot a 98, Ryan Kennedy shot a 100 and Aaron Singerhoff shot a 110. Brynn Martin shot a 57 for nine holes as an exhibition for Athens.

Towanda's Mitchell Shoemaker shot an 85, while Nick Innocenzo and Chandler Dunn each shot 87 and Zack Lantz shot 94, while Ryan Chilson shot 99 and Dayton Wickwire had a round of 114.

"We let one get away today," Towanda coach Tim Farley said. "We had some guys lose their composure and we just cannot afford to have that happen when we're in a match where every single shot counts."

Northern Tioga got a round of 79 from Tanner Adriance and Tyler Vargeson shot a 92. Caleb Fitzwater shot 102, Riley Thompson and Alex Abbott each shot 103 and Christian Kemp shot 108. In exhibition play Bryce Ianson had a 58 and Brandon Paul had a 56.

Northeast Bradford got an 81 from Nate Watkins and Mike Wallitsch shot 96, while Jared Harris had a 104. Grant Marino shot 106, Nate Chilson shot 113 and Jarrett Randall had a round of 143.