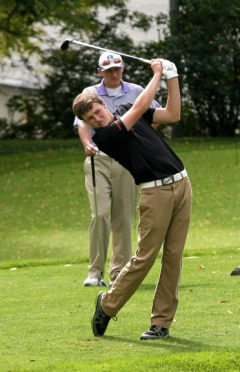 TOWANDA - The NTL golfers took advantage of playing at Towanda Country Club during the first day of the District IV Championship Thursday.

Two of the three, six out of the top 10 and nine NTL golfers total made the cut after the first day.

Lourdes' Evan Salmone shot a 78 to lead the field.

"I felt pretty good about it," remarked Innocenzo. "I know I left a few shots out there."

The junior will be looking to get those shots back on Saturday by focusing on approach shot and putting.

The senior Kendrick felt good on the day, which included a birdie on 12 when he drove the green.

"I played pretty good," he said. "I stayed safe. I had a few holes that could have been a little better but ultimately I performed pretty well. I'm in pretty good shape."

North Penn-Mansfield's Ryan Campbell shot an 82 and sits in fifth after the first day.

"I feel it was pretty solid," said Campbell.

This was a much better round than his NTL round from a few weeks ago.

Last time he went big but this time he managed the course more.

"I played smarter golf," said Campbell. "And actually I have a brand new swing. I've had about a week to get used to it. My boss said that it would work out for me and it did."

As for Saturday, Campbell wants to manage his nerves as well as the course.

"I think tempo is going to be big," he said. "I have a lot of nerves so I think it's going to be staying smooth and having a pause at the top of my swing and staying focused."

Also in the top six after day one are Montgomery's Kohltin Bartlow (81) while Mifflinburg's Matthew Southerton (83) is tied with Sayre's Ryan Murrelle (83).

The top six after Saturday move on to Regionals.

"I feel good," Murrelle said. "I mean I could have shot a little better just to make a couple putts but an 83 is pretty good for me."

The freshman believes he can improve his score if he works on his putting.

"My putting wasn't all there today," he said. "Some of it was, I just need to work a little harder on my putting and I should be fine."

Northern Tioga's Nick Cevette and Athens' Jacob Aquilio both finished the day with 84s to sit tied for eighth.

"Good until hole 18," Cevette described his day. "I got into a little trouble and tripled the hole. It's not awful but it's not great."

Despite the bad hole he only sits six back of the leader.

"Hit better shots and stay out of trouble," Cevette said about his focus for Saturday.

Wyalusing's Holdan Hitchcock had a Jekyll and Hyde type day.

"I played poorly on the back and strong on the front," he said. "You can't shoot 11 over on the back but I finished out strong. That puts me in good shape for the second day."

The sophomore finished tied for 10th with an 85.

"Putting is going to be my big focus," Holdan said about his focus for Saturday. "Putting would have shaved five, six strokes off my game today."

Aquilio also felt that he could have done better.

"I played alright," he said. "There are some putts that I should have made that I didn't. I started off really well and I played OK."

Aquilio is hoping to get his putting down on Saturday.

"Make sure I can read the breaks properly and just make them," he said.

Aquilio liked his score as it is only one stroke out of the top six.

"If I can shoot that again on Saturday I think I'll give myself a good chance," he said.

North Penn-Mansfield's J.P. Shaw (87) made it to the second day for the second year in a row.

The sophomore wasn't qualified as an individual but a new rule allowed those who weren't qualified but still shoot under the cut play on Saturday.

Towanda's Michael Johnson snuck in with an 89, just one stroke under the cut off of 90.

"It could have been better," he said. "I lipped out a few par putts, had a few double bogeys. It should have been a lot lower than I did."

Nevertheless, Johnson was excited to make it to Saturday.

The team portion didn't go as well for NTL teams.

NTL-leading Athens was the top local team, taking sixth with a 377. Towanda was just behind with a 381 in seventh while North Penn-Mansfield was eighth with a 385.

Midd-West won the team title with a 354 while Central Columbia was two strokes back with a 356.

For Towanda after Innocenzo and Johnson Mitch, Shoemaker shot 102 while Zach Lantz had a 110.

And for the Tigers after Campbell and Shaw, Jarred Burd and Patrick Ross shot 108 while Josh Everetts had 110.

The low score of the day went to Milton's Katie Behnert as she shot a 1-under 70.

Golfing resumes at 10 a.m. on Saturday back at Towanda Country Club. Instead of a shotgun start there will be tee times.

As for the second day, the forecast calls for rain but the local golfers aren't worried.

"Just another day in the rain," remarked Innocenzo.

There are both negatives and positives to the wet weather.

"Greens won't be as fast but the rough's going to be a little hard if it's wet out," said Johnson.

Cevette isn't worried about the rain.

"I hit the ball far enough I don't need the roll," he said.

Some golfers feel that the rain could help them.

"It could give me a positive impact because greens are going to stick a little bit," Aquilio said. "Give myself some better chips."

Murrelle is excited to play in the rain.

Regardless of the weather the match has to be played.

"I say just wear a coat and deal with it," said Campbell.