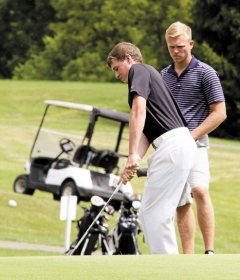 The NTL golf season kicked off on Monday with the Athens Wildcats picking up the victory with a team score of 349.

Athens was more than 20 shots ahead of any other team as Mansfield took second at 372, followed by Towanda at 378 and Sayre at the same score.

Sayre was fourth, Northern Tioga was fifth at 398, Wellsboro was sixth at 418 and NEB finished at 448.

Before the match former Sayre coach Scott Taylor, who passed away this year, was honored. The league renamed the NTL Sportsmanship Award in his honor.

Wyalusing has four golfers playing as independents and Holdan Hitchcock earned medalist honors with a round of 79.

Athens was led by Zach Sitzman at 81 and Jacob Aquilio and D.J. Springstead each shot 89, while Patrick Cole rounded out the top four with a 90.

Mansfield got an 81 from Ryan Campbell and Jarrod Burd shot 92, while JP Shaw shot a 94. Josh Everetts rounded out the top four with a 105. Carl Dinger shot 108 and Patrick Ross shot a 110.

Towanda was led by Nick Innocenzo with a round of 80. Mitch Shoemaker and Michael Johnson each shot 95 and Ryan Chilson rounded out the top five with a 108.

Towanda edged Sayre because of the 111 by Lantz as the fifth golfer over the 132 of Colburn.

Northern Tioga got a round of 82 from Nick Cevette and Caleb Fitzwater shot a 97. Alex Abbott shot a 103 and Riley Thompson rounded out the top four with a 116.

NEB got a round of 110 from Michael Wallitsch and Sawyer Russell also shot 110. Nathaniel Vandervort and Nik Geiser each shot 114, while Jared Harris shot 116.

The NTL is at River Valley on Tuesday, August 26.