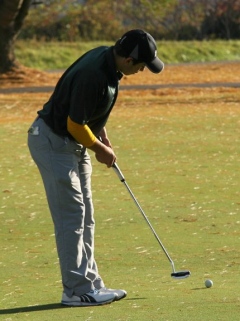 CHEMUNG, N.Y. - While Towanda took the match it was Athens taking the NTL golf title Monday.

Their third place finish at Tomasso's clinched them the league title with a final record of 38-4.

"It's great, it feels great," said Athens coach Jeff Novak. "It's the first time for me as Athens' head coach, it's wonderful."

Novak knew that at the beginning of the season they would be in the hunt.

"I knew we would be competitive," he said. "But again, the season, especially at the end, proved that there is a lot more competition out there. I think the NTL overall looked really good."

He was especially happy to finish out the title on their home course.

"Now I can celebrate on our home turf," Novak said.

Towanda won the match with a 330 behind Nick Innocenzo's medalist effort with a 79. Zack Lantz added an 83, Michael Johnson and Mitchell Shoemaker both had 84 while Ryan Chilson shot 99.

Knight coach Tim Farley was happy to see his team's season end on a positive note.

"A really nice, excellent way to end our team season," he said.

Chilson's effort was a career low as he broke 100 for the first time.

"Four and three men, Lantz and Shoemaker, struggled at districts on Thurday, they both follow up here today in a team setting and both career lows there for them as well," said Farley. "Finishing off the season on a great note and my one and two, after the weekend they had. Mike, coming out after a great finish on Saturday follows it up with his second lowest round of the year. Great way to wind up his season senior."

"Nick following up Saturday with a medalist effort, wrapping up player of the year in the league," said Farley. "I coulnd't ask for a better way to wrap up our team season. We look forward to continuing next week and hopefully keep Nick's season alive."

He was also impressed with the Wildcats this season.

"I give a lot of credit to Athens for their championship this year," he remarked. "They were deeper than us, they wre steadier than us, they had few less ups and downs and it showed in the final standings. I wish we had more chances to play them now that we have scores going in the right direction but all the congratuations to them."

North Penn-Mansfield was second with a 347 behind Ryan Campbell's 81.

In exhibition action Cody McNett had 52 over nine holes while R.J. Farrell had 67.

Wellsboro was sixth with 387 behind Brett Kendrick's 83. Also for the Hornets, Ryan Reese and Charles Graner both had 100, Stone Alexander shot 104, Kyle Reese had 114 and Zach Lundgren shot 129.

Northeast Bradford was seventh with a 390.